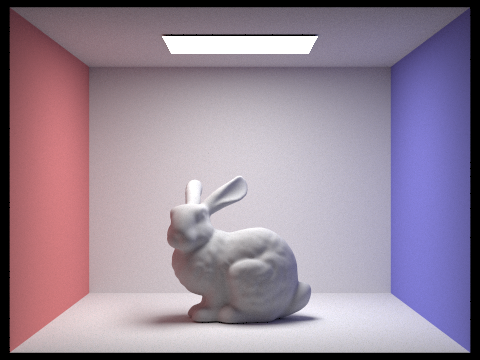 This is a CS184 Project. This time, it’s just the bare minimum rubric items because I’m a little swamped by work. You can still find pretty images peppered within the post though, if those interest you : )

In this project, I implemented a ray generation routine that starts with input coordinates from the image space and generates a ray with coordinates in the world space. I also implemented the ray-intersection routines for two types of primitives: spheres and triangles. Then, I implemented both direct and indirect lighting to achieve global illumination. Finally, I implemented an adaptive sampling feature so the program can intelligently decide when to stop sampling.

Initially, the pixel position we need to render comes in the form of (x,y) that’s in image space, i.e. it indicates which pixel is being rendered. We first add a random offset to this coordinate to determine which point in the square encompassed by (x,y) and (x+1,y+1) we will sample. Then, we divide the result by vector (w,h) to obtain the normalized coordinates.
To generate a ray, we start with defining the two corners: the bottom left and the upper right in camera space. Since the x and y positions are now mapped to the range [0,1), we can simply do a linear interpolation of the corner points using those two parameters:

The ray we generate originates from the camera origin and has a direction of v. Both vectors are converted from camera space to world space using the c2w matrix.
Finally, we set max_t and min_t of the ray to limit the minimum and maximum rendering distance.
Minor implementation note: Since c2w does not use homogenous coordinates, we have to manually add the position of the camera to the origin to obtain the origin of the ray. We don’t have to do this for v because v itself is a delta.

Now that we have our ray, it’s time to find out where it intersects with the scene so we can use it to calculate light transport.

Sphere intersection is relatively straight-forward, not least because spheres can be expressed by the simple equation, where c is the center of the sphere and R is the radius of the sphere.

Given that a ray can be expressed as

We can set p=r(t) to obtain

For triangle intersection, I simply implemented the Moller Trumbore Algorithm: 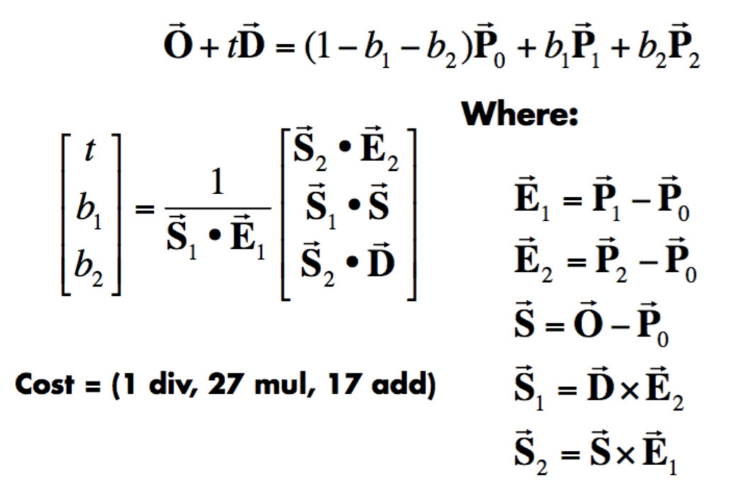 What’s nice about this algorithm is that aside from being fast, it also returns the barycentric coordinates at the intersection, which can be used to determine the normal vector by interpolating the three vertex normal vectors.

Then we use a similar approach to how we derived the intersection formula for spheres: substituting a point on the triangle P with a point on the ray’s path.

Moving the unknowns to a single vector, we obtain the equation

Taking the inverse of the left matrix and multiplying it on both sides, we obtain an equation that we can use to directly calculate the values of our unknowns. However, to reach the simplicity of the Moller Trumbore Algorithm, we also need to transform our answer using Cramer’s Rule and an equation that links the determinant of a 3x3 matrix to the cross products of its column vectors ∣A,B,C∣=−(A×C)⋅B=−(C×B)⋅A=−(B×A)⋅C. Here, I omit the actual derivation, but with those two equations the procedure is fairly mechanical.

We first loop over all the primitives and use them to expand a bounding box. This bounding box is thus the bounding box of the current node. Then, we check if the number of primitives is smaller than max_leaf_size. If it is, then we can return the node.

Otherwise, we proceed to find the variance of the centroid of the bounding boxes of every primitive object passed in on each axis. We take the axis that has the largest variance as the axis that we will split with.

We sort the primitives in place using a custom comparator that compares the location of the primitives on the selected axis. Then, we take the middle element of the primitives as a splitting point and pass each half to recursive calls of construct_bvh. Finally, we assign the returned nodes as children.

In estimate_direct_lighting_hemisphere, we first make a local coordinate system for the hit point, with the normal pointing in the z-direction. Furthermore, w_out (the direction that the outgoing light takes) can be obtained directly from inverting the direction of the ray. The point that the ray is hitting can be obtained by r.o + r.d * isect.t.

Then, we loop through the number of samples requested, each time creating a new random w_in (the direction that the incoming light hits this surface) using hemisphereSampler->get_sample(). We create a new ray using hit_p as the origin and w_in as the direction. We need to make sure that both are in world coordianates, because we will use this ray to test intersection with the scene. Also, caution was made to offset the origin of the ray by EPS_F to circumvent numerical precision errors.

Next, we test this ray against the scene to see if we hit a light. If we do, we add the contribution to our answer using the equation 2 * PI * light_i.bsdf->get_emission() * dot(isect.n, w_in) * isect.bsdf->f(w_out, w_in). The first term is the inverse pdf, the second term is the emission from the light, the third term comes from Lambert’s cosine law, and the fourth term is the BSDF of the current point.

Once the loop finishes, we divide the answer by the number of samples taken and return it.

The procedure is largely the same as the uniform random sampling function. The key differences are:

As we can observe, when we increase the number of light rays per sample the noise level in soft shadows decreases. This is because by generating more light rays and averaging the results we are obtaining a better estimate of the actual amount of the light that is at one spot through our unbiased estimator.

In est_radiance_global_illumination, we first check if the depth of the ray is not zero. If so, we proceed to generate direct and indirect lighting. If not, we only return zero_bounce_radiance.

Inside at_least_one_bounce_radiance is where global illumination happens. First, ray depth is checked as a base case. If we reach 0, a black Spectrum is returned. Next, direct illumination is calculated via calling one_bounce_radiance. (Notice that although we call this direct illumination, if we are not in the first recursive call, then this result will contribute to the indirect illumination of a prior call). Then, we create a new ray in the direction of bsdf->sample_f. We test intersection using that ray with the scene. If it doesn’t intersect anything, we are safe to return just the direct illumination. If it does, we perform a coin flip with probability 0.7 to decide whether to continue. In the case we want to continue, we recursively call at_least_one_bounce_radiance and add the (scaled) result to the output. Here that this result is scaled by 1) the BSDF of the current surface 2) Lamberts’ Cosine Law 3) inverse of the Russian Roulette probability 4) inverse of the pdf returned by bsdf->sample_f.

This concludes the implementation of indirect illumination.

Notice that surfaces only show their original color with direct lighting, but show the colors reflected from neighboring surfaces with indirect lighting.

Increasing max_ray_depth seems to give us diminishing returns. This makes sense, because when the light bounces farther its contribution to the final radiance is going to diminish with the cosine term at every bounce. As we go from 0 to 3, the scene becomes visibly brighter and more vibrant. However, the difference between a max_ray_depth of 3 and 100 does not seem very significant, though still noticeable. In particular, the blue/red tint is more pronounced on the white walls when we increase max_ray_depth to 100. 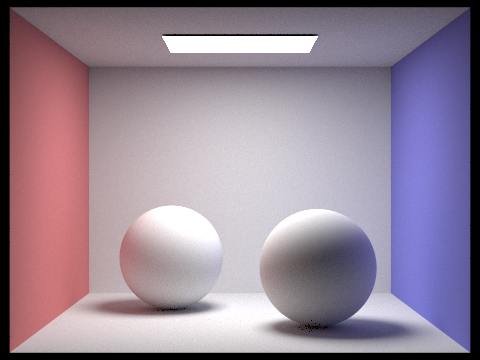 As we may expect, when we increase the sample rate per pixel, the noise goes down.