This is a CS184 Project. For graders, if you are looking for a list of rubric items and their locations within this post, please scroll to the bottom of the page. For everyone else, please read on.

Rasterization is a method of taking in mathematical descriptions of a scene and turning it into pixel values that we can display on a screen. As a simple example, imagine if we have a triangle defined by three vertices: (0,0),(5,0),(5,5). Since most of our screens consist of a grid of pixels, then in order to display this triangle, we will need to fill in the framebuffer at each point on the grid with a color. This process is called rasterization. Although the objects being rasterized are most commonly triangles, rasterization can be applied to other shapes as well.

In this part, we implement a simple CPU rasterizer that draws a triangle with a single color.

The first step is to calculate the bounding box of the triangle. After all, we wouldn’t want to loop through the whole pixel buffer if our triangle only occupies a small portion of it. This is achieved by taking the minimum and maximum of the coordinates to obtain two diagonal corners of the bounding box.

Notice that all of the newly rotated vectors now point inwards. Observe that if a point is ‘on the same side’ of the edge as the normal vector for every edge, then this point must be inside the triangle. To see how this could be tested, let’s focus on a single edge.

Let P=(x,y) be an arbitrary sample point, N be a normal vector to the line defined by P0​ and P1​, V=P−P0​. We want to figure out if N and V are ‘on the same side’ of the line as each other. From the diagram, we can see that V⋅N=∣V∣∣N∣cosθ>0⟺ V and N are on the same side. Now we just need to calculate N⋅V for each edge, checking whether they are all positive to determine whether a point is in a triangle!

Now if we reverse the winding order, the rotated vectors will all turn outwards. Can we still use a similar method to determine whether a point lands in a triangle? Yes! Instead of testing whether all of V⋅N is >0, we test if all of them are <0.

In the actual implementation, we first generate functions V⋅N=L(P) for all three edges. Then we loop through the sample points in the bounding box, evaluating the three L(P)s at that point, and comparing their sign.

Now that we have triangles on the screen, it’s time to give it some color - or textures. In order to do that, we need to figure out at each sample where the sample lands on the triangle (so we can apply the texture accordingly). Barycentric coordinates are a widely adopted way to do this.

In essence, barycentric coordinates are simply a set of numbers that describe a linear combination of vertices of a given triangle.
For △ABC, if P=(α,β,γ), where α+β+γ=1, and A, B, C each has an associated value, then

For instance, we can use it to describe location inside a triangle. The midpoint between vertices B and C can be described in barycentric coordinates as (0,0.5,0.5).

Representing location with barycentric coordinates is certainly useful, but its power lies in its ability to naturally map a location on a triangle to other data. For example, we can use it to map color. If we define the three vertices of a triangle to be of the color red, blue, and green respectively, then for any point P in the triangle, we can map its barycentric coordinates to a color defined as C(P)=αA+βB+γC. The result is a triangle with smooth color transitions: 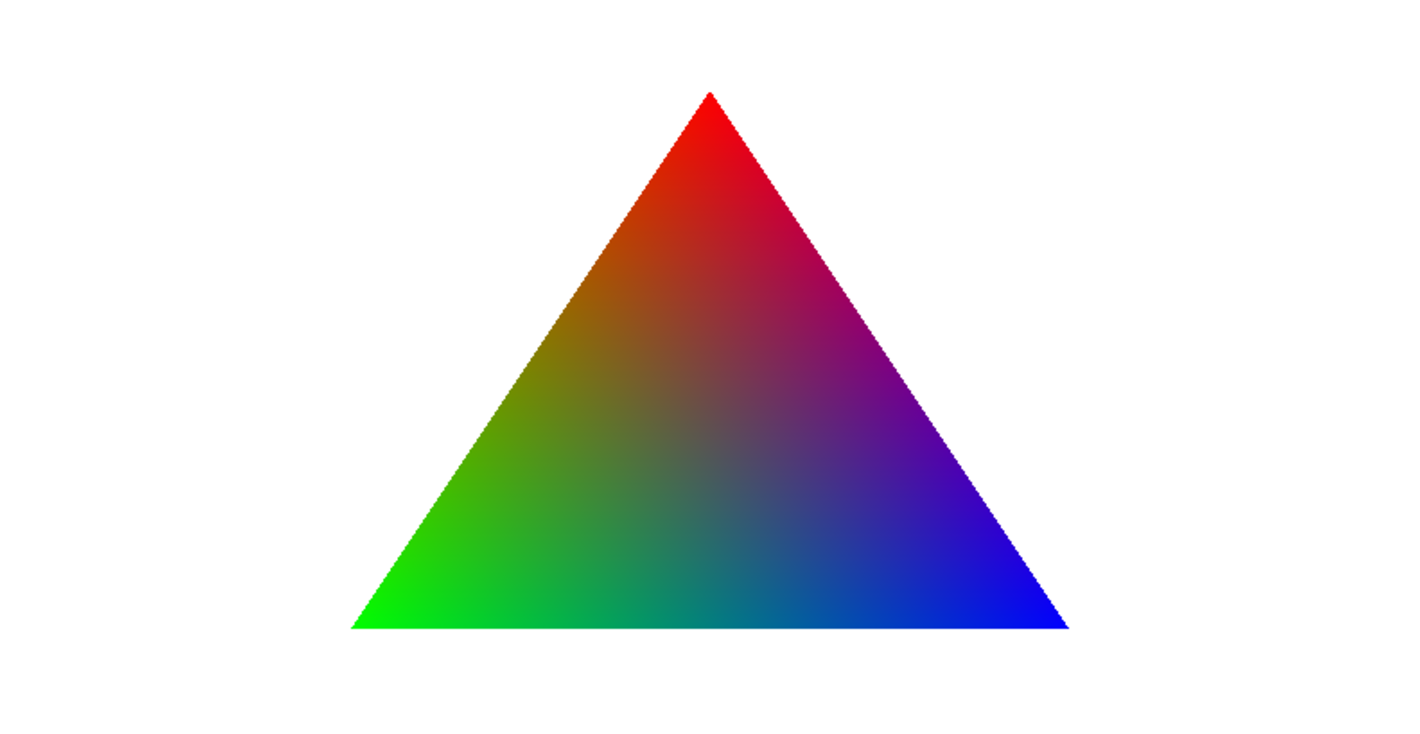 If you are a project grader, this section is for you. For everyone else, the following section may be slightly cryptic.

When we map a texture from texture space to screen space, we may face two difficulties:

Level sampling partially solves these problems by storing different levels of low-pass filtered and down-sampled textures for any given image. Depending on whether the underlying surface is close or far away, different versions of those images are used. Our rasterizer implements three modes:

Level D can be calculated using the equation

In plain words, this equation calculates the maximum texture space coordinate change that happens corresponding to 1 unit of coordinate change in screen space on either the x or the y direction. If the change is more rapid, level D is also higher.

In the implementation, rasterize_textured_triangle populates a SampleParams struct that contains the location of the sample point, the derivatives used in the above implementation, and the sampling mode (0, nearest, or bilinear). This struct is then passed to sample, which calculates the level from the given derivatives and either calls sample_nearest or sample_bilinaer depending on the mode.

In terms of speed, 1 pixel per sample is the fastest compared to sampling more than once. Nearest neighbor is faster than bilinear interpolation in pixel sampling. In level sampling, nearest and level-0 are similar in speed because the only extra calculation that nearest has is level calculation. Bilinear is slower than both, because it essentially weights the two nearest level sampling results.